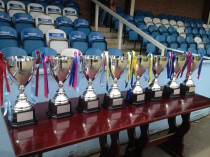 The League was established for the 2011/12 season.  The winners of all our competitions can be seen by selecting the relevant season.  While it is right to honour the acheivements of the teams which have been successful, the League exists to enable girls to play in an appropriate competition, and therefore it is all those girls who have taken part and shared the football experience together who are the real winners!

The League aims to run two divisions in each age group.  Where there two formats in a particular age group, such as a division of 11 v 11 and a division of 9 v 9, the division with the largest format would be division 1, with the other format as division 2.  There are normally cup competitions within each age group which match the league divisions.  The finals of the cup competitions have taken place in previous seasons at Thatcham Town FC and for the 2021/22 Season, at Ascot United FC.